Aria Alexander needs to earn her space in Jack Hammer's stable. He has girls throwing themselves at his feet, looking to experience the kind of sexual domination that he has become so famous for and Aria is here for her audition for the role of his newest pet. She certainly looks the part, a sexy young woman that is begging for a strong man to take control of her and put her in her place. She has a body that turns heads whenever she is walking down the street. In the dungeon, though, there is no audience to be enthralled by her looks, just Jack, here to put her through the wringer and see how she handles it. 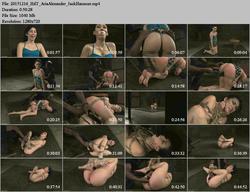 Dear visitor, you are browsing our website as Guest.
We strongly recommend you to register and login to view hidden contents.